Life’s not fair, how having my ear amputated at 8 helped me 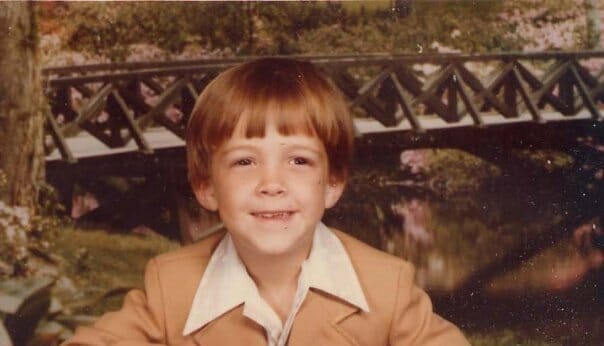 Ears. Funny looking structures that much like snowflakes, no two are alike, even your own. Although they don’t seem like a big deal, it’s a major deal when you don’t have one. Without them, the daily things take on a whole new challenge – wearing glasses or listening to headphones (pre earbuds), your baseball cap being straight on your head or simple things such as your sideburns matching when you get a haircut. As strange as ears are, they give us symmetry and keep us balanced. More importantly, they give others the perception we’re ‘normal’. Without them, people think something is wrong with you. You’re broken.

I lost my right ear when I was 8, having been accidentally set afire by a neighbor’s kid. It was 1982 and burn trauma care was still somewhat barbaric or shall we say ‘in the learning phase.’ My ear was severely burned and infected, gangrene had set in and was spreading. Initially doctors thought they could contain the infection by snipping off the end of my ear with a pair of surgical scissors, piece by piece, day by day. If this sounds bad, it was even worse. The doctors would actually snip off the corners of my ear with no pain medication or numbing agent, assuring me it was dead tissue and it wouldn’t hurt much. I always wondered what was their basis for “much”. Had they actually had part of their ear cut off while they were awake? They would snip my infected ear until they reached good tissue with a healthy blood supply. 32 years later I can’t recall the pain, but I do recall screaming uncontrollably. As a protective mechanism, I think our brain blocks out these memories. Eventually the time came to remove the entire ear for fear the infection would spread to my head. I can’t imagine what my mother had to go through when the doctors gave her the choice of telling me the bad news or letting them. How do you tell your only child, your baby, whose body was swollen beyond recognition and bandaged from head to toe, completely unable to move his right arm or neck, that he will now lose his right ear? I can’t imagine what was going through her head but I know God miraculously gave her the strength and courage that was needed for the situation.

I’ll never forget that day although some things are clearer than others. I remember laying in my bed, confined to it for over a month, and greeted by my parents as part of the daily visitation ritual. Visitation was limited to 2 hour periods, 3 times a day, with all visitors required to wear protective gowns and face masks. No matter how many times they told me, as an 8yr old I could never understand why I could never see my parents’ faces or why I could only see them in 2hr intervals. When visitation ended every night at 7pm, I longed all night for morning and prayed it came quickly, often crying myself to sleep with no one there to comfort me. To make matters worse, due to the severity of my burns and the fact we had no insurance, my mother and I had been relocated from our home in Atlanta to the Shriner’s burn hospital in Cincinnati. My father remained in Atlanta, our sole source of income, making the 16hr round trip commute every weekend to see me. As you can imagine, these were extraordinary times that you’d never wish on your worst enemy. On this particular Saturday morning, mom breaks the monotony of our conversation and says “Shay, look at your dad. See those big, goofy ears. You are so lucky because you are only going to have one of those, not two.” Her attempt at humor softened the blow and I know inside she was fighting back the tears, struggling for the courage to assure me all would be ok – truthfully she didn’t know. She was a rock and knew she had to demonstrate this was not the end of the world. Losing an ear was nothing compared to the kids surrounding me that had lost a hand, an arm, a leg and one had even lost his fingers, toes, nose, ears and even his eyelids. I knew all things considered I was ‘lucky,’ but as the news sank in, all I could do was cry. This marked the last day I would have 2 ears.

The one eared burn guy

For the next 27 years, I would be known as the 1 eared burn guy or passionately by one coach as the 1 eared bandit. Right or wrong, it was reality and I embraced it. What other choice did I have? Surprisingly, having just one ear wouldn’t seem like a big deal in comparison to the scars covering 65% of my body but it seemed to be the one thing people noticed right away. Complete strangers would often say “hey, what happened to your ear.” Kids, curious and naïvely, would almost daily say “where’d your ear go.” Looking back, it’s crazy to think on any given day some stranger would ask where my ear was. Not “hello” or “how are you doing”, but “what happened to your ear.” Feeling much like Groundhog Day with these unsolicited questions, I decided to make the most of a bad situation and have some fun with this experience. I figured if complete strangers have no qualms asking me personal questions, then surely it’s acceptable for me to embellish and test my imagination with stories to rival Greek mythology.

One incident in particular will go down as one of my all-time greats. I was a teenager and was swimming at the Horseshoe Bend neighborhood swimming pool, a popular summer day destination for all my school friends. As I was waiting my turn to test my aerial skills on the diving board, a kid, probably 8 or 9, comes up to me and asks “where is your ear.” I played dumb and said, “what do you mean. It’s right here” and pointed to my ears or at least where they should be. Troubled, the kid says “you’re missing a right ear, where is it?” and literally points to my little nub of an ear. Feigning a puzzled look and reaching up to where my right ear should be, I said “oh my gosh, it’s gone. I hit my head on the diving board trying a gainer flip and thought nothing of it.” I immediately ran over to the diving area, pretending to scan the pool bottom for my ear. Excited by the challenge, the kid recruits 4 of his buds and they jump into the deep end and start looking for my ear. Almost immediately one of the kids surfaces and says “hey, I found your ear. It’s on the drain but I can’t swim down that far.” One by one the kids would swim down about 5-6 feet and suddenly emerge to the surface out of breath and unable to retrieve what appeared to be my ear on the drain. Fearful the kids would continue diving until sheer exhaustion, I told them I’d get the pool sweeper and retrieve it from the drain at the end of the day. Surprisingly enough, everyone seemed ok with this solution and went back to their pool activities.

Make the most of it

Over the years I have adapted my story and infused lots of creativity. According to urban myth: I’ve been attacked by a shark in 3 feet of water while retrieving sand dollars, I was the only survivor of a plane crash in the pacific, I was nearly decapitated by a barbed wire fence while riding my motorcycle, I was attacked by piranhas while boating the Amazon, and the list goes on. Sadly but still funny, people never knew if I was telling the truth or just making it up. I know some were believers because they refused to go into the ocean for the remainder of the day.

Those 27 years taught me a great deal about life. Most importantly, life’s not fair nor will it ever be. I learned life can be harsh but to make the most out of it and remember someone always has it worse. I learned complaining gets you nowhere and no one enjoys being around a complainer. As the saying goes, if someone gives you lemons, make lemonade. That’s the way I approached it. I couldn’t help having just one ear and I learned quickly others would never let me forget it. But I also learned how I adapted to my deformity greatly shaped others perception. Once I embraced it, truly accepting it as a part of me that I couldn’t change, I learned others rarely noticed it or if they did, they quickly forgot. If you ever think about it, we’re all pretty dang lucky.

PS… coming soon – stories of my chocolate ear and the joys of having a prosthetic.